Saturday 15th May 2021
You are at:Home»News»Obsession starring Jude Law to be broadcast live in 60 countries

Hollywood heartthrob Jude Law will hit the big screen straight from the stage on 11 May when Obsession, directed by Olivier and Tony Award-winning director Ivo van Hove, will be broadcast live from the Barbican Theatre, in partnership with National Theatre Live, to cinemas around the world. Priority booking is now open on the NT Live website.

The highly-anticipated Barbican/Toneelgroep Amsterdam production has British actor Law play the magnetically handsome, down-at-heel Gino in a new stage adaptation of Luchino Visconti’s 1943 film of the same name. A tale of crime and passion, the story follows the entangled lives of drifter Gino, his lover Giovanna, and her ill-fated older husband Giuseppe.

Toni Racklin, head of theatre at the Barbican, said: ‘We are delighted to be working in partnership with NT Live to screen our Barbican/Toneelgroep Amsterdam production of Obsession to 2,000 cinemas in 60 countries. Featuring members of the striking Toneelgroep ensemble and British actors led by Jude Law, and directed by Ivo van Hove whose work often looks to the greats of 20th century cinema, we, together with our audience on the night, look forward to making this a very special event.’

Emma Keith, head of broadcast and National Theatre Live said: ‘We’re thrilled to add Obsession to the list of fantastic productions we will be broadcasting around the world as part of National Theatre Live in 2017. The show takes our total number of broadcasts for the year so far to a record eleven which is really exciting for us. Having previously worked with Ivo van Hove we know the incredibly high standard of work being produced and we are very excited to be working with the Barbican and sharing this production with the world.’ 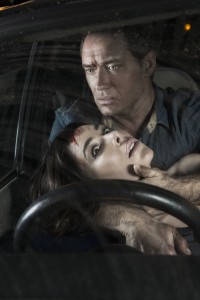 The production is a co-commissioned by Wiener Festwochen and Les Théâtres de la Ville de Luxembourg and co-produced by Holland Festival and David Binder Productions.