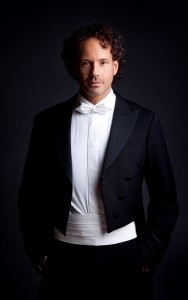 Serbian conductor Aleksandar Marković has been confirmed as the new music director at Leeds-based company Opera North, and will take up the post from September 2016.

Based in Vienna for much of his career, Marković was music director and principal conductor at Brno Philharmonic Orchestra from 2009 to 2015. Prior to that, he held the role of chief conductor at Tyrolean Opera House in Innsbruck (Tiroler Landestheater).

The 40-year-old made his debut with Opera North in 2015 conducting Janáček’s Jenůfa, and in recent seasons he has led the orchestra of Opera North in symphonic concert programmes, including works by Wagner and Strauss. He takes over from Richard Farnes, who has held the role for the past 12 years. Farnes’ time at Opera North concludes with a tour of six complete cycles of Wagner’s Ring this summer.

Marković will launch the 2016-17 Opera North season in September by conducting performances of Strauss’ comic opera Der Rosenkavalier, in a revival of David McVicar’s production.

Richard Mantle, general director of Opera North, said: ‘Aleksandar joins Opera North at a crucial moment in the life of the company, as we conclude our journey through Wagner’s Ring this summer with our outgoing Music Director Richard Farnes, and look ahead to new beginnings through Aleksandar’s musical leadership.

‘Opera North is unique amongst UK companies in that our wonderful orchestra, the Orchestra of Opera North, sustains a significant symphonic programme alongside the opera season and we are delighted that Aleksandar becomes its Principal Conductor.

‘Having already delivered performances of great vivacity and depth of expression, both in the opera house and on the concert platform, I believe he will bring his flair, energy and musicality to the company and, as a colleague, will play a crucial part as Opera North forges into the future.”

“I can honestly say that when I first worked with Opera North it felt like love at first sight, and ever since my admiration and affection for the Company has continued to grow and grow,” added Aleksandar Marković.

“For me, Opera North’s trademarks include the highest standards in performance, exceptional creative focus in rehearsals, and a unique, warm, and supportive working atmosphere.  The motivated and talented orchestra, soloists and chorus reach for the stars every single time they perform, bringing enormous pleasure to their appreciative audiences.

“Opera North is exactly where I want to be right now and I am very excited by the prospect of working with them much more closely. This a brilliant new chapter in my life and a bright challenge to which I commit myself fully.”

Opera North will announce further details of the 2016-17 season in May.