Arna Einarsdóttir has led Iceland Symphony Orchestra from the depths of debt in 2013 to the success of a sold out Japanese tour in 2018. Now, as she prepares to leave the orchestra, she reflects on her challenging tenure as general manager. Andrew Anderson reports.

When Arna Einarsdóttir joined Iceland Symphony Orchestra (ISO) as concert manager in 2007, its future could not have looked sunnier. The following year the orchestra would take its first tour to Japan, meanwhile chief conductor Rumon Gamba had established a reputation for performing new Icelandic music. And, better still, ISO would soon move into its new home at Harpa in Iceland’s capital city.

Then, as the global financial crisis unfolded in 2007-08, all that optimism came to an abrupt end. “Before the collapse in 2008, we had managed to tour at least once or twice a year,” recalls Einarsdóttir. “With our recordings and tours, people knew us internationally. Then, after the crash, it came to a complete standstill.”

Construction on Harpa had begun in 2007 but by the end of October 2008 all the private companies behind the build had gone bankrupt (see pages 24-25). The tour to Japan was also cancelled, but all was not lost, as what came in its place was something very special.

“When the Japanese tour was cancelled, we decided to give free concerts here in Iceland instead,” says Einarsdóttir. “We’d been rehearsing a programme of Sibelius and we played it to full halls across the island. It was so intense. People came and they were thirsty for the experience; they needed to come together and listening to music helped them get in touch with their feelings during a time of national crisis. Suddenly, I could feel in my own skin the importance of what we were doing.”

That experience stuck with Einarsdóttir and has fuelled her work with the ensemble. When she took over as general manager in 2013, the orchestra had survived the worst of times, but there was still a lot to do.

“The first problem was that we were in quite a bit of debt when I took over,” says the general manager. “That impacted on the second priority, which was to strengthen our artistic repertoire and international profile.”

The first task would take time and careful management. For the second, Einarsdóttir looked both inwards to the music created by Icelanders, and outwards to the artistic leadership of the orchestra. First, she signed Osmo Vänskä as principal guest conductor and then Yan Pascal Tortelier as music director in 2014. An acclaimed violinist as well as a conductor, Tortelier has previously led esteemed ensembles like BBC Philharmonic and Ulster Orchestra. 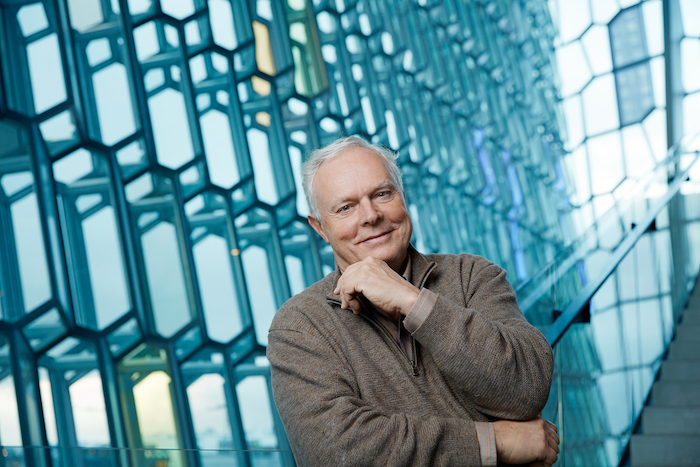 “It has been a beautiful journey with him,” reveals Einarsdóttir. “He has managed to make the orchestra blossom. That’s the best way to describe it.”

In addition to instilling confidence in the players, Tortelier also expanded ISO’s repertoire.
“He has really focussed on French music,” she continues. “I wasn’t sure how it would work out at first, because before he joined we’ve worked so much with the Scandinavian sound. We feel very confident in performing Sibelius, for instance – we understand this musical language very well, it’s very natural for us. But Pascal has said that the Iceland Symphony Orchestra sound fits French music so beautifully and it has expanded our palette of colours – we have more range now in our expression.“

Tortelier’s appointment certainly raised ISO’s profile and quality of playing. This, combined with the orchestra’s support for national composers, led to international offers, like trips to the Kennedy Center, Washington DC in 2013 for the Nordic Cool festival and to the BBC Proms in 2014, where both programmes featured new Icelandic music.

“We have worked very closely with really important Icelandic composers like Daníel Bjarnason, who was composer-in-residence for three years, and now we have Anna Thorvaldsdóttir in that position,” Einarsdóttir adds. “In this collaboration they are not just writing commissioned work for us but actually working in tandem with us: they sit on the programming committee and take an active part in shaping our artistic vision. It’s really hands-on.”

In addition, Bjarnason and Thorvaldsdóttir have brought ISO closer to other major international orchestras – for example, the New York Philharmonic, where Thorvaldsdóttir was a recipient of the Kravis Emerging Composer Award in 2015.

She says: “Having them on board has meant we’re collaborating with Los Angeles Philharmonic, Berlin Philharmonic and the NY Phil – so suddenly we’re in direct contact with really influential orchestras all over the world, which has been incredibly important for us.”

The full version of this article appeared in IAM volume 15 issue 2.