Whether it’s staging flash mobs on balconies or inviting music students to perform in the ranks, the National Symphony Orchestra of Colombia has a lively, inclusive approach that has made it a key player in the country’s burgeoning classical scene.

Once a month the musicians of the National Symphony Orchestra of Colombia gather on the balconies of the organisation’s offices, located in a traditional, colonial area of Bogotá. Passersby crowd into the pretty streets below and listen to the players’ impromptu concerts.

It’s just one of many performances the Colombian orchestra regularly stages in unusual places: other settings include churches, streets, schools and shopping malls. ‘We really enjoy doing open-air concerts,’ says executive director Claudia Franco. ‘We also do a lot of flash mobs so that the public can really see behind the traditional, academic setting of an orchestra.’

Franco believes this imaginative, inclusive approach has had a quantifiable effect on the orchestra’s audience. ‘Around three years ago, the audiences that came to our concerts were quite old,’ she says. ‘It’s changed a lot since then; we’ve really renewed our audiences and there are a lot of students coming, and not just those who are studying music.’

The programming itself, as well as the staging, has had a big role to play in this shift. Everything from Hollywood soundtracks to Mahler to new Colombian music has its place in the line-up. This month the musicians travelled to the picturesque coastal town of Cartagena to play a programme of cinematic music, as part of the Cartagena International Film Festival. The concert was set to images of several movies, as the orchestra plays the scores of Psycho, Dracula, Schindler’s List and The Ten Commandments.

At the end of March the orchestra staged an homage to the Colombian composer Luis Carlos Figueroa under the Bogotá-born conductor Juan Sebastián Acosta. This is followed on 3 April by a concert led by Hansjörg Schellenberger, with works by Jean-Baptiste Lully and Richard Strauss. Other maestros who will conduct the orchestra later this year include Chile’s José Luis Domínguez, Colombian Andrés Franco, Sarah Ioannides from Australia, Russia’s Guerassim Voronkov and Tomasz Golka from Poland – who is the orchestra’s chief conductor.

In addition to a diverse range of music spanning various eras, the symphony also programmes large ensemble works in order to feature young musicians who are studying at Colombia’s universities. ‘It’s very hard for students in Colombia to have the opportunity to work with an orchestra,’ says Franco, ‘so we try to have at least four concerts during the year where we can invite young musicians in the last year of their studies, so they can have this experience with the orchestra.’

Depending on the repertoire, between 20 and 40 students from institutions in Cali, Bogotá and Medellín are invited to join the symphony for rehearsals and a final performance. ‘Last year we did Berlioz’ Symphonie Fantastique with 41 students,’ says Franco. ‘It was a wonderful programme. Our orchestra’s musicians are quite young, on average between 33 and 35, so they have a wonderful teaching attitude towards the students and towards playing different kinds of music. They’re really open to all possibilities. I think you can really feel that vibe – and I believe the emotion the players put into their concerts is really what makes us different from the other orchestras in Colombia.’ 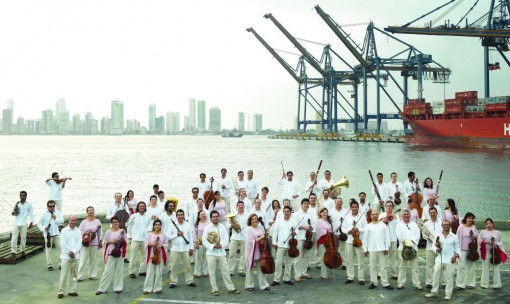 The classical industry has seen significant growth in Colombia over the past decade. Where there used to be only around five major universities offering music studies, there are now 32, says Franco. Regardless, there are still only five professional orchestras in the country, two in Bogotá, two in Medellín and one in Cali, and the arts are not a key priority for either public or corporate budgets.

‘Because of the size of Colombia, all five of us are asking for funding from the same sponsors, so we’re always grabbing the piece of the cake from each other,’ laughs Franco, ‘but despite this we’ve all managed to build really interesting programmes over the years.’

‘We receive 80 per cent of our funding from the Ministry of Culture,’ she continues. ‘The rest of the budget stems from ticket sales and sponsorship. Corporations tend to support education rather than arts, and they don’t consider classical music as education. This is something we’re trying to change.’

Innovative approaches to securing funding form an important part of the orchestra’s budgeting strategy. The symphony is involved in a scheme which aims to provide children in poor communities with instruments. The orchestra approaches major instrument dealers from around the world, purchases some of the best available using Ministry of Culture funding, and then distributes the instruments to schools and community centres across Colombia. The orchestra charges a fee for the management of the contract, which serves as a key source of income.

‘We’re really giving the possibilities for lots of young children in very poor parts of the country to start a classical education,’ says Franco.