Monday 23rd May 2022
You are at:Home»Features»Classical:NEXT takes on technology 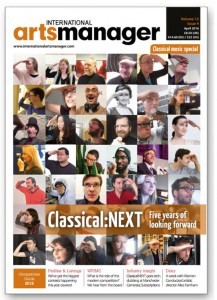 The May issue is out now!

Classical:NEXT celebrates its fifth birthday this May and together with its global community looks to the future, including a new focus on technology. Andrew Anderson finds out more from director Jennifer Dautermann

Are You Retweetable, Instagrammable and Likeable?

Classical:NEXT has always had a focus on community. Whether that’s networking at the conference, presenting a showcase or staying in touch throughout the year, participants are encouraged to see themselves as part of something bigger than an annual get together.

For Classical:NEXT director Jennifer Dautermann that means much of her year is spent searching for new members that can add to this community. ‘We try to attract new people and new sectors to achieve a better balance. We find out what they need and try to fulfil that need. We do the same with regions that are underrepresented. That way we can truly be a gathering of all voices in the classical music community.’

That approach has served Classical:NEXT well so far; numbers have increased year on year, and 2016 will see delegate attendance increase once more. Feedback from attendees is excellent and, as Dautermann points out, ‘There’s a sense that a global network is being built.’

As Dautermann travels around the world there is one word that is coming up more and more often: technology.

‘In developing this edition, I realised we need to make technology a priority,’ says the director. ‘It isn’t just online or ticket sales – it is onstage as well, it is all aspects. So many people in the industry are trying to understand this issue: how can they best use technology?

When and where should they use it? What projects will make the most of their technology resources?’

Although Classical:NEXT has always included technology elements they have been expanded for 2016 to help address these questions. First, Katariina Nyberg was added to the jury that filters through proposals and potential presenters. Nyberg is an arts manager and tech expert, and her presence has ensured a greater focus on technology-based projects in all elements of the 2016 event.

In the conference programme, for example, technology is addressed from multiple angles. In the sessions “That Syncing Feeling, Streaming – the Challenges and Opportunities” and “Beyond Streaming”, the potential of online media and concert platforms is discussed, while “Are You Retweetable, Instagrammable and Likeable?” deals with online presence and appearance.

In NEXT:tech, meanwhile, Nyberg looks at four different pieces of software, from digital sheet music applications like neoScores to the new Wolfgang app that interprets classical music in real time.

‘Alongside all that we have a tech stand at the expo,’ adds Dautermann. ‘There we hope to have developers of projects so that visitors can come to that stand and see demos of the projects and speak with the developers.’

And this is just the beginning; Dautermann is already working on new partnerships that could bear fruit for Classical:NEXT in the future. ‘Right now I’m talking with Aleksi Malmberg from Finncult, the Finnish Cultural Institute in Brussels. He’s a champion of new tech and the arts, and sees incredible potential for interactive technology and its interaction with art and music. I have high hopes we can develop a really great programme together over the next few years – we are on the same wavelength.’

‘We also have just begun talks with Music Tech Fest. Their mindset is very much like ours. They’re trying to bring all music tech thinkers and creators in the same place. Positivity, innovation, working together – these are similar principles to ours. I am sure we can develop a happy partnership.’

Finally, Nyberg and Classical:NEXT are offering one-on-one mini-consultations to help trouble shoot specific problems. Says Dautermann: ‘Delegates can sign up to spend 15 minutes with her on their tech related questions. Maybe they have a specific thing they want to do and need some advice, or maybe they just feel they need to do something with tech but they don’t know what to do. Katariina Nyberg can give some tips and advice on what they could do and what might make sense for their organisation.’

Technology isn’t the only element at the forefront of this year’s conference. Operadagen, the opera festival, is taking place earlier in the week, and so Dautermann has added a musical theatre tie-in. ‘We’re going to have a smooth transition – Operadagen ends, and then we open right after. Those who choose to attend both can go seamlessly from one to the next, with a discount for those attending both.

‘We have more music theatre content this year, and we have put it on the first day so those attending Operadagen can get content that is relevant to them without attending the whole of Classical:NEXT.’

What with host venue de Doelen celebrating its 50th birthday too, it might feel like the event is a bit overwhelming – how can you possibly get through all of these activities in just four days? Luckily, Dautermann and her team have planned an introduction session to help orientate both first time and returning delegates.

‘We call it the newbie session,’ explains Dautermann. ‘It is the first thing at the conference. We coach on how to network, and then we go through the programme and explain how it all works.’

But, she adds, it is still best to do some prep before you get to Rotterdam if you want to make the most of it. ‘You have to put in some work beforehand because it is a big event, a complicated event – especially if you’re new to taking part in large networking conferences.

But if you do that – if you use our C:N Net database and contact people in advance – then you’ll get even more out of it and make the very best use of your time and effort.’