This April violinist Yuki MacQueen travelled to Jacmel in Haiti as part of a Utah Symphony Orchestra outreach project – the Haitian National Orchestra Institute. Here she reports for IAM on the experience of working with young, talented musicians who lack the opportunities many young Western musicians have.

Sixteen Utah Symphony musicians stepped off the micro bus onto the street lined with shabby but colourfully painted French colonial style buildings with wrought iron grates and little balconies. In front of us was a large, white building. The narrow street could barely accommodate the bus, and yet motorcycle taxis whizzed by. Pedestrians dodged between street vendors, scrawny stray dogs sniffing for food scraps, and uniformed school kids looking crisp as though they had walked right off a school brochure.

This April, I joined 15 of my Utah Symphony orchestra colleagues in a service mission to Jacmel, the seaside cultural capital of Haiti, to participate in a week-long, first-ever Haitian Orchestra Institute.

The familiar pillars in front of the white building belonged to the Dessaix-Baptiste Music School in Jacmel, Haiti. From the upper floor, one could hear the indistinct sound of classical music. As we entered the narrow hallway and up the rickety old stairs, the sound became louder and clearer. It was the first movement of Beethoven’s Fifth Symphony, being rehearsed in advance of our arrival by the institute’s youth orchestra and Haitian conductor, Canes Nicolas. Rehearsal was in full swing even though the Utah Symphony musicians had only arrived a few moments ago, and our music director Thierry Fischer was not due to arrive until the following day for his first rehearsal with the National Orchestra Institute.

The stairs creaked under our weight, and at the top of the staircase, we found ourselves in a large room filled end to end with 110 students from 19 different music schools throughout Haiti. The orchestra stopped, everyone turned to see the newcomers, and the two groups found themselves staring at each other curiously and with more than a bit of uncertainty. But the awkwardness quickly dissipated as Janet Anthony, president of BLUME Haiti (Building Leaders Using Music Education) stepped forward and introduced the two groups in English and in fluent Haitian Creole. Thus began our one-week adventure of teaching and coaching music in Jacmel.

The white pillars of the music school were familiar to me as I visited the school last July. Three Utah Symphony musicians – cellist John Eckstein, Associate Principal Oboe, James Hall and I (violin) – had come to Haiti for 10 days in 2016 to participate in a summer camp organized in partnership with BLUME Haiti.

John, a long-time friend of Janet Anthony, wanted to see the country and work with these music students that Janet had been gushing about. For the past 20 years, she has travelled to Haiti during every available vacation from her “day job” as cello professor at Lawrence University in Appleton, Wisconsin. James and I jumped at the opportunity to volunteer with John and see a new country. The cultural experience was incredible and eye-opening, and we were sure that our orchestra friends at Utah Symphony would cherish the experience as much as we had.

Later in 2016 John and I began approaching our friends who had shown a keen interest in our July trip. We asked them whether they would consider paying their own airfare to Haiti if we were to organise some sort of Orchestra Institute for that week. The response was almost unanimously yes. The minute Thierry Fischer heard about the project, he also wanted to be involved. And voila: the first Haitian National Orchestra Institute was born.

Of course, once we’d made this decision there was the endless planning and fundraising. It was a full-time obsession for Janet, John and myself, even as we navigated through our respective school semester and orchestra seasons. The plan finally crystallised, with lessons and sectionals to run in the mornings, with afternoons dedicated to full orchestra rehearsals with maestro Fischer. The faculty chamber music concert would take place on Thursday, and the final student Orchestra concert on Friday. We added a course for string instrument repairs and restoration with our luthier friend, John Paul Lucas, and also a music management course.

The formal nature of the initial soon morphed into mutual admiration and respect, and warm bonds were formed. Sectionals and lessons were intense, and the students were truly interested in learning from our knowledge and experience.

One of the most heart-warming bonds I built was with a teenager named Ishel. I first met then-13-year-old Ishel at the summer camp last July. I noticed him right away because he was the smallest kid in the first violin section, but he was keeping up with the best of them. With his slight build and disarming smile, he was easily mistakable for a kid several years younger. I found him to be very bright, to have an exceptional ear, and great coordination on the violin. He still plays on a three quarter-size violin because of his height, but he is at the age when kids typically transition to a full-size. We had “friended” each other on Facebook, so I had kept up with most of his posts, and knew that he had visited Lawrence University (where Janet teaches) in early winter, and that he had been accepted into a three-week summer programme of the intermediate division of the famed Interlochen Arts Camp, but couldn’t attend because of prohibitive costs.

Utah Symphony violinist David Langr and I were assigned to teach the 16 members of the first violins, splitting up our allotted four hours into sectionals, technique class, and private lessons. We both loved working with Ishel because he came prepared, and when he would reveal a technical shortcoming, it was an easy fix because he would comprehend the point we made immediately. 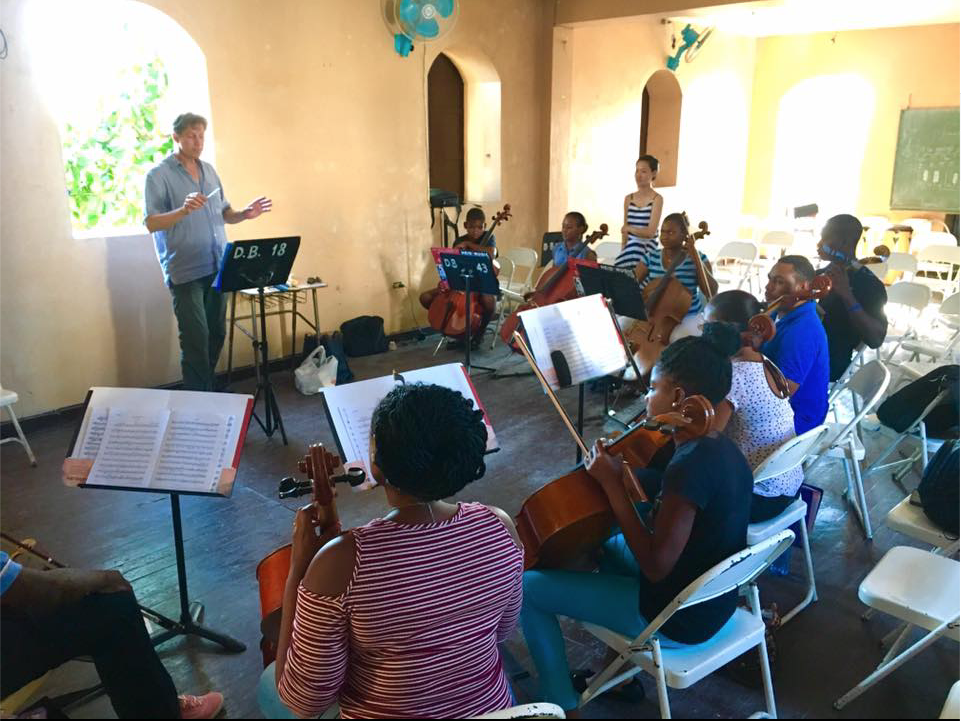 It’s a joy to work with such students who are super receptive and motivated. And it certainly made us feel like teaching geniuses even though, in actuality, Ishel was just an exceptional student. At one point Ishel asked me how to get a better tone, and I listed the standard technical checklist (sounding point, bow speed, bow pressure and amount of bow hair). I proceeded to demonstrate the passages in question, but he had a hard time controlling his tone.

Slightly mystified, I borrowed his violin to demonstrate how one could coax a better tone out of any instrument. The problem was obvious right away – granted, I was able to get a slightly better sound than he, however it was clear his instrument was greatly limiting his possibilities. Discouraged on his behalf, I handed him the full-size violin I was playing. I had accepted the donation of this particular violin from JP, our luthier, to play for the duration of the week, and to be left behind for BLUME Haiti to distribute along with the 20 or so donated instruments we had brought with us. We were advised against giving things directly to the students in the interest of fairness, so even though my instinct was to hand my violin to Ishel for him to keep, I had to keep that urge in check.

Instantly, with my full-size violin under his chin, his small scratchy sound was transformed into a sweet, mellifluous tone. It was a heart-rending moment for me, because I had been given all of the equipment and opportunities that I had needed as a kid studying the violin, but Ishel, with all of his promise and talent, was limited by finances and lack of opportunity.

Janet and I were talking about Ishel later in the day, and I mentioned my sadness about his instrument. To my great relief, Janet wanted my violin to be used by him. Maybe not given to him outright, but given to his school to be used by Ishel as long as he needs. Happiness filled me, and I could barely contain this news.  Right before the final student orchestra performance, Ishel came up to me to take a photo and to thank me for a great week. It was at this moment that I whispered, “I think the violin that I’ve been playing will be in your hands soon.” His face beamed.

The final orchestra concert conducted by Maestro Fischer was a resounding success, and the celebration banquet was filled with the incredible energy of live music and Haitian dancing. When we left that weekend, our souls were nourished, and we all felt like we left a piece of our hearts in Haiti.

You can read cellist John Eckstein’s account of the trip here.