Friday 22nd January 2021
You are at:Home»Blog»Can the arts can help dementia sufferers?

While money is gradually being invested in finding a treatment for dementia, the arts can help improve sufferers’ lives right now, says Maria Parsons

Dementia now affects over 800,000 people in Britain. It’s estimated that dementia care costs the UK GBP23bn each year – that’s twice as much as cancer, three times as much as heart disease and four times as much as stroke. If dementia care were a country it would be the world’s 18th largest economy. Family carers are the cornerstone of care for people with dementia, but the emotional and financial costs are high. The disease is terminal, and there is no cure or effective disease modifying treatment beyond a few drugs that suit some people and seem to be efficacious for about a year or two.

Experts estimate that dementia will affect 135m people worldwide by 2050. The recently established World Dementia Council have set out ambitious goals to address one of the major public health priorities of the 21st century, with partners agreeing to improve international collaboration, increase investment in biomedical research, and ambitiously find a cure or disease-modifying treatment by 2025.

All of this paints a very bleak picture. But here is the better news – and it’s all about the arts. The Creative Dementia Arts Network recently held its third national conference which was, as usual, oversubscribed by a wide range of delegates from agencies and organisations including those from the arts, culture, health, social care, academia and government from the UK, Europe and North America, all eager to connect with each other, listen to excellent talks and participate in amazing workshops.

Read: Arts can change the lives of early dementia sufferers

It’s hard to do justice to some of the work taking place – whether its John Killick, who has been writing poetry with dementia for decades; Chris Gage, whose workforce development organisation Ladder to the Moon uses applied drama with staff and residents to develop creativity and communication in care settings; and David Slater and Zoe Gilmour of Entelechy Arts whose Little Boxes of Memories are filled with the memories of older Londoners, then shared by artists through performances with disabled audiences. 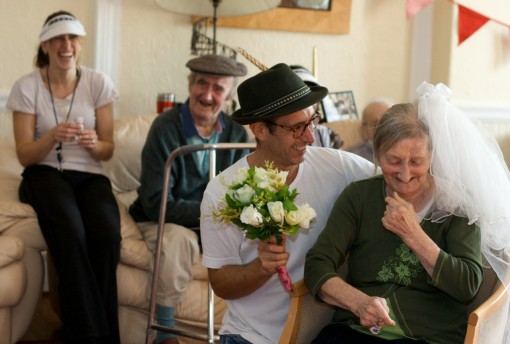 Ladder to the Moon

Nevertheless, this non-pharmacological approach continues to lose out to the pharmacological largely because it’s not wholly proven to be effective. Setting up a randomised controlled trial of, for example, laughter for dementia (there are a lot of clown groups going into care homes at the moment), or sessions provided by the English National Opera in a day centre, is more problematic than testing a new drug (although that too is a lengthy, costly process).

The sceptics (and I am one) think it’s a red herring – commissioners might like to see some evidence of the effects of arts for dementia, but their budgets are under pressure. So it’s drugs and home care that are purchased ahead of Singing for the Brain, dancing with dementia, theatre as day care and other experiences generating fun and joy, facilitating play or simply reminding us of beauty. The arts and health movement has had some success in the take-up of art on prescription, but people with memory loss are more likely to be prescribed anti-depressants than a specially curated tour of a national museum.

Of course there is a place for drug treatments, but everyone, especially people with dementia, need something to get them out of bed in the morning. What is sometimes overlooked is that not all abilities, memories and skills are shot away all at once, and defining dementia as a disability raises the distinct possibility that something can be done. We need more supporters and headlines that say arts work, new learning is possible, and rehabilitation is not nonsense.

Whilst people with dementia swiftly lose memory for dates or performing activities requiring memory for complex sequences, the hard-wired emotional and bodily memories – the sun’s warmth, smiles, autobiographical memories, social norms and best of all, sensory memories, are less compromised. We know that hope is pretty important – not in the sense that one hopes people with dementia will get better, they won’t – but by offering opportunities through art, anyone caring for a person with dementia offers hope to enjoy the moment, have a great half an hour, or a brilliant day.

Put yourself in the shoes of someone with a dementia. Recall how you feel trying to figure out a complex musical score handed to you at the last minute with a performance due, or finding your way around an unfamiliar theatre with an urgent need to get to a toilet in the interval, or the many other occasions when the social or physical environment has indeed ‘disabled’ us. Now think about not really knowing where you have come from or are going to in a municipal car park, or going upstairs and immediately wondering why you there, and the anxiety, frustration and anger that often ensue. Then identify what would help you feel better….a bit of Bach, some felting, pottery, or sitting in front of a Matisse (or maybe just Punch and Judy).

It’s with some reservations I read the priorities identified by the World Dementia Council’s Statement of Purpose, looking in vain for how to live a good life with dementia now. I wonder how many council members faced with early signs of dementia would favour a visit from the post-diagnosis dementia advisor over a visit to an art gallery and afternoon tea – the answer is probably we need both, but the focus on the silver bullet of cure blots out research and development of arts for dementia.

Maria Parsons is the director of Creative Dementia Arts Network, based in Oxford, UK.